1992-2003
In the early 90´s in a small hobbyshop owned by Karl Däuber in Enslingen, the first RC-1 kits designed by Ewald Trumpp were produced. It was called the KARAT 60 (1800mm wingspan).
Every kit was produced by Karl, who was also Ewald’s uncle, individually as per the customer’s request, and he was very flexible with his versions: Fixed landing gear or retracts, 2-legs or 3-legs, raw kit or painted. Because he accommodated every customer’s wish, the model became very popular. Due to the huge success of KARAT 60, Ewald Trumpp and Karl Däuber developed 2 additional sizes: KARAT 40 (1400 mm) and KARAT 20 (1200mm wingspan).
The KARAT was first popular at the local club of Untermünkheim. Then because of its good design, soon in neighboring clubs, and later all of Germany, then across all Europe.
But then the rules of F3A changed. Larger glow engines were allowed, which meant also that the planes needed to “grow up“.
From that time until today, the rules of 2x2m and max weight of 5kg were set.
As a result, the KARAT grew up as well. During this winter, my father and his uncle sat together and designed the new KARAT 2000, so named because of the almost 2m wingspan.
By this time, it had become the best selling airplane by Ewald Trumpp.
Worldwide sales were several hundred kits. They were even sold in the USA.
Without Facebook and the internet, this was quite a remarkable number.

After KARAT, followed the models Turmalin, Zirkon and Spinell (all named after gemstones).
Spinell was probably the most mature and neutral of my father’s designs, with which he won his first, and only, German Championship in 2003.
Unfortunately this plane never made it into the hands of customers, because after Karl Däuber passed away in 2002, production was stopped.

2015-2017
At the end of 2015 I started with the first sketches on my iPad for a new biplane design.
I didn´t want to reinvent the bipe, that’s why I followed the common design with the canopy behind the top wing because I like it most. Cooling for the Motor, ESC and battery is very important. Which is the reason for the large air intake at the front below the motor, and the even larger air outtake on the side of the fuselage between the wings, done in the style of Porsche motor vehicles. Because I am a very big fan of the elegant lines à la Porsche, my design should have a very clean and elegant line as well.

After finishing the plane, we needed a name. The air outtakes were based on a special Porsche car, In my opinion the most beautiful car design in the present day. I thought about naming the plane as one of the Porsches or something very similar.
But then THE idea came to my mind!
I decided to pay tribute to the success and popularity of my father’s earlier design, and hence the model was given the name KARAT biplane

Together with my team we created in 2 years with a lot of tests and changes our „dream biplane“ and finished it in time right before the World Championships in Argentina 2017. 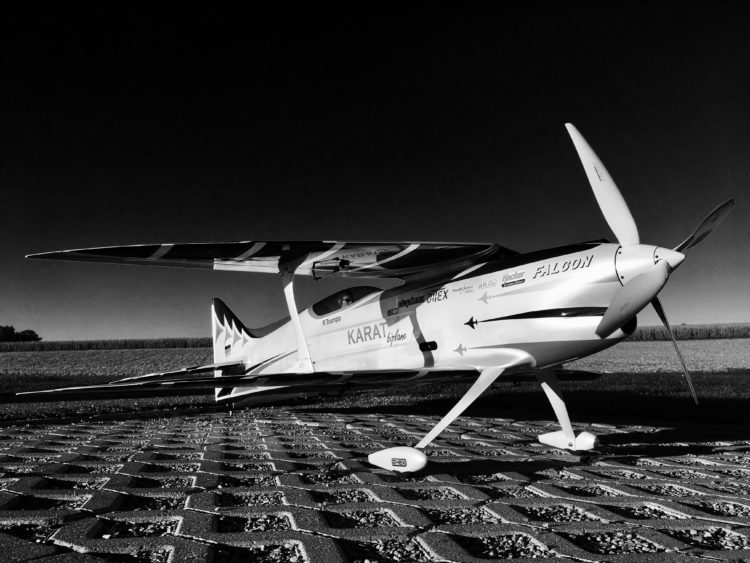