October 21, 2018Written by Robin
Leave a Comment
A year ago I heard that CNC Modelparts  from Switzerland offered a turboprop for the JetCat P20/ Kolibri. Immediately I decided to build a Karat with a turboprop myself. Due to the air intake at the bottom and at the top and the straight sidewall it is perfect for a turboprop conversion. Also the exhaust gas can pass through the two wings.

In December 2017 I drove to Switzerland with my JetCat P20 to pick up the Turboprop from CNC Modelparts. At the same time I shared my idea with Carlos Marquez from CM Jets in Spain, he immediately became enthusiastic about the new concept and promised me a custom made fuel tank for my model. Two weeks later I already received the new  Kevlartank  for my turbo KARAT.
FALCON received my order to build an adapter for the fuselage, which I can easily attach to the zero side thrust nose, due to the F3A Contra-Rotating-System, to receive the necessary side thrust.
At the Rotor Live Helicopter fair in Iffezheim, I discovered for the first time the innoflyer light system, which was new in the product line of Hacker Motor. I became impressed by the innovative, simple and efficient handling. During dinner with Andreas Golla from Hacker and Christoph Raible from innoflyer we started speaking about my special project, the turbo KARAT.
Andreas Golla suggested to equip the plane with an innoflyer lighting system. At first I had the impression he was joking, but when I realized he was serious about it I actually thought it was a great idea.
On a piece of paper I received from the waiter we determined the position of the light on the model, and ordered the parts immediately.
After the Turboprop, all DITEX Servos and the lights were installed, the plane had to be varnished.  I was planning on an
easy but also a bit scale finish. In addition to the KARAT I worked on a Scorpion from Aviation Design with a Patrouille Suisse color scheme, which I like a lot and it is visible in the air.
As the Turboprop and the lighting are both from Switzerland, I decided to adjust the color scheme of the Ptrouille Suisse so it matches the KARAT.
Before I installed the turbo, I painted the whole body area of the turboprop inside twice with BVM Heatshield to avoid prickly  heat in the carbon/fiberglass of the body. After everything was rewired and finished, the first flight took place in the beginning of May 2018.  Everything worked out perfectly right away. In the meantime, I had a performance problem with the turboprop, but this was due to small kevlar pieces in the kerosene filter.
The plane now has about 30 flights and everything still works fine.
At the end not the most spectacular plane I’ve ever built, but definitely one that I have the most fun with!
And just the worlds first F3A turboprop biplane – turbo KARAT.
Also I would like to thank everyone who was involved in this amazing project:
CM-Jets, innoflyer, CNC Modelparts, Hacker Motor, JETI model, PowerBox Systems, FALCON

Many thanks to Philipp Rösner for another great video of turboKARAT!

On the 18th of August JETI hosted the annual JETI model Meeting.
A few top pilots supported by JETI came to CZ for making the airshow interesting and diverting with many highlights.
Especially all those scratch build airplanes from the Czech pilots also taking part in the show are stunning and make it worth to join this event.

Martin Pilny made some really great snapshots of my Pilatus PC-21- thanks for them!

Thank you JETI model for the invitation and the awesome weekend!

I would like to introduce you a project I am part of.
It is the StickMover by AVIrem!
It looks like a radio, but this device is not sending. There are 4 digitalservos installed which are moving the 2 sticks.

What does StickMover do?
You are watching a video of a complex heli or airplane maneuver while holding the stick mover in your hands. Your fingers are on the sticks like on a real radio. While the video is running the StickMover moves the sticks synchronous to the maneuver in the video.
It shows exactly how to fly the maneuver in any speed you choose. You repeat this until you feel safe and ready to try it in real or in a simulator.
The StickMover “takes you by the hand” for every complex maneuver.

What has Robin Trumpp to do with it?
Next to the helicopter aces Eric Weber and Nico Niewind I am responsible for the airplane maneuvers in the programme.
The maneuvers are not created by a computer software, they are all flown with a lot of effort and diligence from real rc-pilots and embedded by the StickMover team to the AVIrem software.

Who is behind the StickMover?
Developed was it by Patrick Zajonc and Ulrich F. Beyle and is after 4 years almost ready for everyone. To make it available for you those 2 guys need your help!
Because the injection mold for making the case of the StickMover is very expensive.
Support the Kickstarter campaign from 15th of February and help to realize this project and get the StickMover to a special price.
DO IT FOR OUR HOBBY!!!

Facts:
-in the Kickstarter campaign from 190€!
– all radio modes
– replay the videos in any speed (ultra Slowmo until realtime and even faster)
– continuously growing maneuvers
– special flights from events (Euro and World championships, airshows..) after it online and ready for “feel them”

Finally in our hands, the brandnew JETI DC-24 in special RT-edition gold/carbon!
Here are a few pictures from the production of this highend radio which I would like to share with you.
Not only the design also the features and the quality is unique, but convince yourself!

After 8 successful years with Futaba we changed in February our radio system and moved to Jeti duplex.
We are very proud and happy that Rainer Hacker (Hacker Motor GmbH) and Jakub Mitura (Jeti model) gave us the chance to this step! 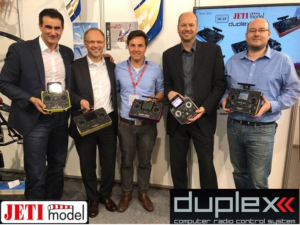